4 Harriers took part in the Cartmel Lakeland Trails on Saturday 18th March, with 3 finishing in the top 10 and 2 achieving podium finishes.

First up was Izzy McCarthy in the hilly 5k (actually 6.3k). Having borrowed her Dad’s baselayer due to freezing cold, she started near the back and progressively worked her way through the field.  She was overjoyed with 7th place overall and 2nd U16 girl. At only 14 and giving over a year away to the winning U16 girl, this was a fantastic achievement. “I couldn’t have given any more.” said Izzy after her trademark sprint finish for a time of 32:51. The last stretch when runners thought they were at the finish but were actually to run another kilometer around part of the racecourse were mentally and physically very tough, yet allowed Izzy to overtake 2 more runners. Full results here. In the 18k trail race, Rochdale Harriers had 3 entrants, all of whom have been racking up the miles and progressing incredibly well with their running in 2018.

Richard Stirzaker decided to really go for it. He said “A lovely day for a run round the South Lakes, although it was quite hard work in the wind at times. I made the wise decision not to chase after the [2] GB internationals at the front and tried to hold on to 3rd as the ‘best of the rest’ and just about managed it! Jon also had a storming run given that he has been focusing on 5k/10k training over the winter.” 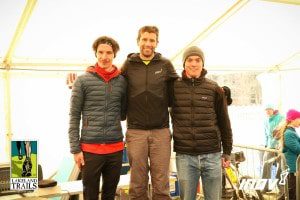 Richard was very closely followed by Jon Dearnley-Lane who ran much of the race alongside 2x TeamInov-8 athletes. Despite stopping at one point to admire the stunning scenery, Jon managed 7th place in a cracking time of 1:22:23. “Not even the comically named “Beast From the East” could prevent me from tackling this course. As standard with Lakeland Trails series races, organisation is executed to such a degree that turning up and running are your only worries.” said Jon. “The course is as picturesque and beautiful as I hoped – so much so, despite being in the top 10 I had to pause to drink in the natural beauty of the place just after mile 5! Running on the trail race provided me with a constant stream of gasps and support from the runners participating in the challenge. I would wholeheartedly recommend this to anyone who wishes to change their outlook from running circles on a track, or pounding the tarmac.”

Ian Stainthorpe brought home the Rochdale Harriers group with a great time of 1:37:08 for 44th place out of 213 finishers. This, after he’d completed the notoriously tough Whinlatter Forest parkrun 9am that same morning! Full results of the 18k race are available here.