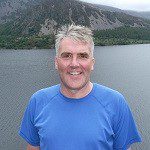 It is with great sadness that we report the passing of John Purdy. John was a larger than life character well known to many in the local running community. John’s good friends Kris Robinson and Phil Williams have kindly written the following tribute to John:

“Any meeting with John was hard to forget. His boundless energy and enthusiasm was ever apparent and infectious. Phil remembers his first ever meeting one rainy winters evening at Marland Hill school, Rochdale Harriers winter training base.

…I just remember this big guy with a beaming grin on his face, soaked to the bone having just come in from a long training run with the seniors,

“Hey there, you’re that young lad who won the colts race at weekend aren’t you”, John bellowed across the corridor as my mum was picking me up.

“Err yeah, I am” I answered sheepishly

“Who was that” my mum asked minutes later as we set off in the car,

“No Idea” I replied

“Well he seems like a really nice chap!” My mum responded looking quite surprised.

John was a regular at Harriers away days to the National or Northern cross country championships which always led to hilarity and a great team spirit. He was also known for his incredible ability to inspire and fulfil others with confidence before races or when the chips were down. A pre race pep talk from John would often end with blindly optimistic statements like “I think you can bloody win this lad!” or “I have heard Salford are after signing you, y’know”. Though deep down you knew these statements were ludicrous, it couldn’t help but energise you and lift your spirits.

John was an incredible communicator, he had an uncanny ability to listen intently and show real interest in your discussion and would often offer insightful opinions and solutions to life problems. He was also very charitable in nature, always one to offer to marshall or officiate at races when needed and a great supporter of new and smaller local races. He would often offer lifts to and from training and racing in what always appeared ridiculously small cars for his size and larger than life character! At the end of cold long muddy days when he had raced a local cross country, he would always make a point of thanking the marshalls and officials for their time, a rarely seen gesture of gratitude to most, but one that was common and typifying of John.

John was well known within the North West running community and some of this fame was due to him being one of the main ‘characters’ on the Fell Runners Association web forum. He was known as ‘Danbert Nocurry’ and joined by fellow Harriers “Brummy John”, “Fergal P Dandy”, “Sparth Bottoms” and “Notlob” in various intellectual discussions/threads. Circa 2006 this forum was hugely popular with Danbert being one of the most frequent and popular contributors across a vast range of diverse topics such as ‘rate your hangover’. Kris recalls a quotation which sums up Danbert quite nicely:

‘ The full English has sorted me out. I drank an entire punch fountain on Saturday night and spent the early hours of Sunday morning walking round in my mates ‘masons’ clothes. Bloody Masons

😃……….ps Think I’ll go for a run on the way home round Tandle Hills, that will definitely sort my head out’.

Joking aside, in his day he was also a good athlete. Naturally very strong, he played Rugby League to a high local level and he also competed regularly for Oldham and Royton Harriers as a youth. As he got older and when he joined Rochdale Harriers he was a regular on the local road and cross country scene and he also ran the 2010 Dublin marathon in a time of 3 hrs 39min. Later in life he was one of the first in the club to embrace the new local Parkruns, an initiative he thoroughly supported and totalled 136 runs altogether, becoming a Parkrun tourist and travelling all over the North West in search of new Parkruns.

Arguably John’s greatest achievement came in December 2004 when he was part of the Harriers team which competed in the snappily titled ‘Radcliffe AC after Christmas Charity 5′. On this memorable day Kris Robinson. Phil Scarr, Ray Dalby and John won the team prize and collected a rather spectacular trophy. John took great pleasure in this unexpected victory and literally became attached to the trophy. Famously he was last seen driving out of the venue in the aforementioned ‘ridiculously small car’ wildly waving the trophy out of his window. Absolute scenes as they would say nowadays!

On the day John passed we discussed “what will be his legacy?” and we think the answer is pretty simple:

‘Everyday just try and be a bit more JP!’ So sad too have missed john’s funeral. He always brought a smile to my face whenever we met. Its hard to believe I wont be bumping into him anymore. Another lovely person has left us. R.I.P.dear john. Sid
Salford Harriers

Not being a regular visitor to the club for too many years now and my first visit to the web page in a while, I was really sad to read of John’s passing. I can remember him being a happy guy who was always striving to achieve his best performance and I can remember him taking great pride in beating me at Cowm Res. I cannot believe this news.