We’ve just started May and already a whole number of Harriers have been successfully completing a whole range of Spring marathons.

For some it’s been their first ever marathon, for others another fantastic experience to savour. We’ve seen personal bests, tears of joy – and no doubt pain!- and smiles.

A great turnout with 5 Harriers completed Manchester Marathon! All were targeting sub 4 hours and for Corina, Chris and Michael it was their first ever marathon. All were rewarded by decent marathon running weather and times reflecting that.

We’re sure they’re all looking forward to their next off the back of this!

We had 4 members running on Sunday. Times are below with half marathon time in brackets. This is followed by their own words on the experience of running London, plus some of their pics which sum up a great day for all of them :).

Now in their own words…

“It was an amazing experience that felt more like a street party rather than a run! The support and sheer amount of people is unbelievable the whole way around, and the volunteers do an amazing job.

I picked up a calf strain with about 5 weeks to go and had a couple of the most important weeks of training off, so was really apprehensive about how it would go. In the end I was really pleased with my time, although the last 5 miles were a real struggle. It is really well organised despite the number of people, and staying in Greenwich near the start was definitely useful! My family and partner Rick came down and did a great job of chasing me around on the tube- I think being a supporter is more difficult than running when you’re battling that many people!

Just wanted to say a huge thank you to the club. The London Marathon has been on my bucket list since I watched my dad run in it as a child, so feel truly lucky and proud to have had the opportunity to represent Rochdale Harriers this year.” 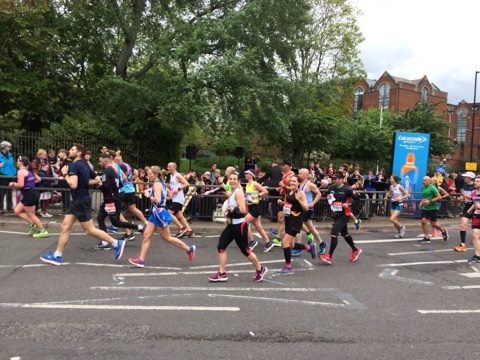 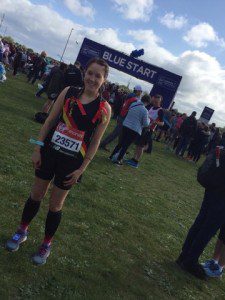 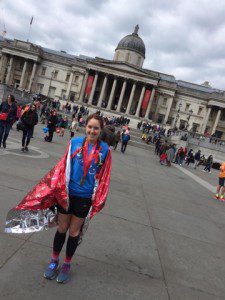 “London Marathon was fantastic.. the organisation was spot on. Free transport for runner on the day. Course was great with lots of fabulous support off the crowds all along the course. Plenty of loos and drink stations and helpful marshals. I had an amazing day so much so i wanna do another Marathon now as i know i can do a sub 5 hr at some point.

I was running for the stroke Association a charity close to my families heart after my gran suffered a massive stroke. She is no longer with us now. I have gone over my target of £2000 with money still to collect.” 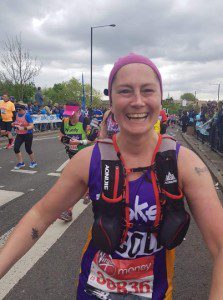 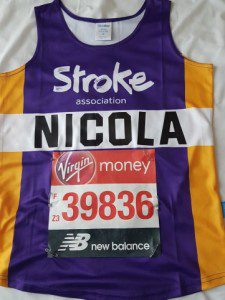 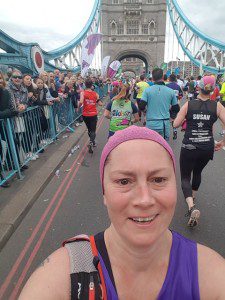 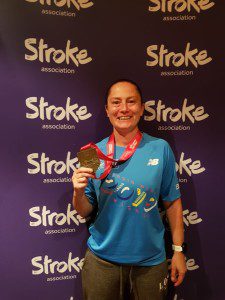 “Since starting to run marathons my goal has been to run all 6 of the world marathon Majors and of course my first one had to be London Marathon. London was the goal from when I very first started running marathons this time last year. Luckily I got my good for age qualifying time with my first marathon in Manchester. I had a fair few pinch me moments especially with being injured for so long and not getting anywhere near the miles in I would normally do. To be stood at the start line of London Marathon was crazy to me. My hamstring pulled from mile 1 all the way to the end. Every time I started to speed up it got worse so I kept at a 9min/10min mile pace, luckily my lower back held out. The goal was to get to the finish no matter what time I ended up with I would of just been so happy to have taken part and finished the race. The atmosphere of the crowds was the best I’ve experienced. It was a very well organised event.” 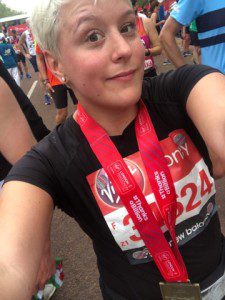 “London 2019 was my 2nd London Marathon, glutton for punishment I know, because we are always trying to better ourselves. Unfortunately for my legs I am still trying to do that!! Six months ago I had a goal of a 4vhour marathon, I then had the whole month of February visiting my daughter in Australia and despite the great intentions the sun and water won. On return to the UK reassessed target time to 4-15. Sods law that I should now pick up a hip injury, which was painful and it was only 2 weeks ago, thanks to my physio, that I managed to run 6 miles pain free. Didn’t want to reassess my time, but expected 4-30.

As for the event, We stayed in a Holiday Inn near to Heathrow, it was near to the motorways and provide transport to the start. Although it was an early race day start it took the worry out of the logistics and we arrived at the start with plenty of time to spare. From beginning to end the organisation was very good and really couldn’t be faulted. You didn’t need Marshall’s on route, there were thousands of people telling you were to go and how to get there ‘Run Mike, keep going Mike, you can smash it Mike.’ The noise level was incredible, especially in the Noise Zones, I was praying for some silence so that I could hear myself think.

Advice for the actual running? Firstly you have to be fit and do the training for the event. Have realistic goals, taking in to account injuries suffered. Set your goals and stick to them, don’t and everybody does get carried away with the fantastic support you are getting. It is too easy to feel good after 6/7 miles and speed up, you’ll regret it after 16/17 miles. I personally felt the pain in the last few miles, it hurt, but I expected it and although I didn’t quite manage my target I wasn’t far out. All in all another fantastic experience representing our club and our town. For those of you who want a running experience and all runners want to experience a marathon, get you entry forms in this week, you won’t know until you try. Strength and Honour.” 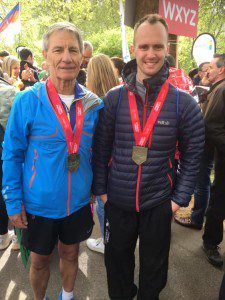 (All pics provided by/via each member.)

So, all in all a really uplifting series of achievements by members of the club. They’ve inspired a number of us to enter the 2020 London Marathon ballot and/or consider other marathons now too!

Doing the club proud every single one of you #StrengthandHonour