Hitting the trails and admiring the Bluebells

ast Saturday saw several Rochdale Harriers hitting the trails. A group did the lovely Bluebell Trail Race while others hit the more craggy Lake District and its hills. 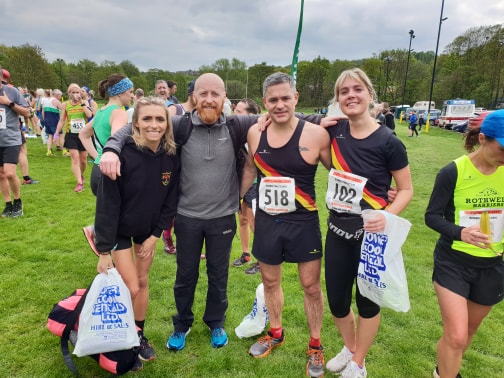 Some excellent running with Fiona Williams bagging a fab prize and accolade of first lady and first Harrier home to boot! Perhaps even more impressive was Nicola Smith managing the 10 mile trail route only 7 days after completing her first ever marathon!

Full results for the race are here. 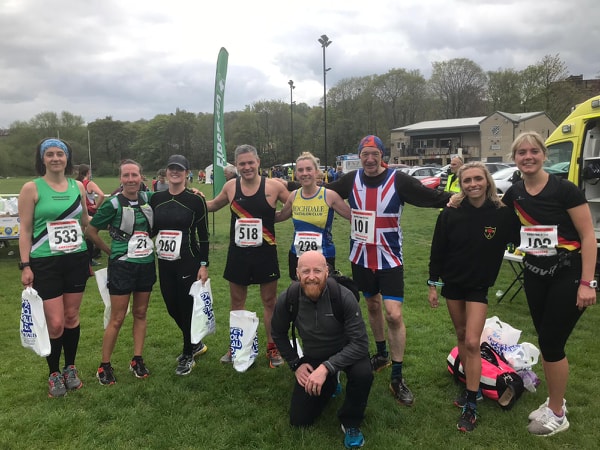 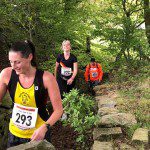 . I loved the race as it was a good mixture of terrains, lovely views, I was a bit apprehensive at first with not running 10 miles for a while but felt really good on the day and enjoyed every minute. Everyone was friendly and cheering on, there were Marshall’s giving out jelly babies along the way which was kind of them. Enjoyed running through the woods but favourite bit was the river crossing at the end as it was something different from other races and my legs were definitely ready for it at the end!”

“What a race! I was told about this race by a friend towards the end of last year. He assured me that it’s a great race and I would love it. I took his word. The tickets were released in January and sold out within 36 hours – luckily I managed to get one!

I didn’t really know what to expect from the race. All I had been told was that it was a nice scenic route but to watch out for Trooper Lane and the river crossing finish.

Trooper Lane is a short, steep, cobbled hill. I do a lot a running on the hills, so I thought this would be a breeze – little did I know. After a nice flat stretch of running on the canal, I approached Trooper Lane. It didn’t start off so bad but it got steeper and steeper – it’s safe to say I was very naive to think this would be a breeze! I was very pleased when I reached the top of the lane where there were some marshals kindly handing out water and Jelly Babies. I grabbed a handful for a boost, then on I went.

The race then continued through the trails and woodland. The route was lovely but I didn’t slow down to enjoy it. At this point I knew was positioned first out of the females and I was keen to keep it that way!

The race finished with a river crossing which was very refreshing after a hard race! Me and a few fellow team mates stuck around for the presentation where I was awarded a lovely little trophy for being the first female to finish the race in 1:22:27.

It’s a great and well organised race with a cracking atmosphere. There was a band playing at the rugby club where the race started and finished and bacon butties and cakes were on sale – the flapjacks were delicious. I would definitely recommend this race and I hope to give it another go next year!” 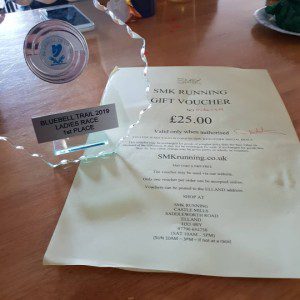 “Brilliantly organised trail race, quite tough going up the famous Trooper Lane and having to go through a freezing River Calder at the end was different!” 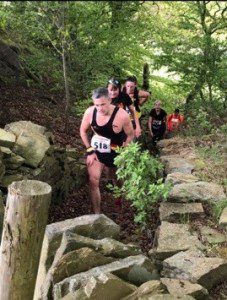 Nicola Smith – this only 7 days after London Marathon!:

“A brilliant race. Scenery is lovely and the route is tough and challenging esp Trooper lane. Sells out very quickly so need to enter asap.. bluebell woods are a stunning end to the race.”

(All pics provided by/via each member.)

The day before, Jeff McCarthy and Ian Stainthorpe represented Rochdale Harriers at the Lakeland Trails “Staveley 18k” race. The word enjoy may be a bit of a stretch when you have the crest of Reston Scar at before a quad-bashing descent to the finish! All exhilarating fun which is why we do it

So another good weekend of racing for the club. Remember there are track sessions Tuesday and Thursday 7pm throughout the summer – designed to help you find that bit of extra speed. And trail runs from Springy Park.