In September all members where invited to complete an online survey, the purpose of the survey was to help understand members experiences as members, what they thought worked well, what worked less well and how they thought the their experience at the club could be improved.

The survey was devised by Jeff McCarthy and I am grateful for his work in not only putting the survey together, but also providing analysis of the results received. These results were shared with the club committee and they have approved the implementation of and action plan with the aim to improve the experience of our members.

We aim to carry out the survey annually in order to gauge how we are meeting the needs of our members.

**We appreciate that due to Covid-19 and related situations out of our control, the club is not operating at full capacity at the moment, particularly in relation to the ability of our junior sections to train. We are doing everything we can to bring back our juniors and once we are able to, consult more thoroughly with them to ensure that we are meeting their training racing needs**

Participation in the Survey

The survey was hosted through the SurveyMonkey® website and links were provided via the clubs WhatsApp groups and Facebook pages. The survey was available for a little over a week and 26 members of the club completed the survey. The breakdown of contributors by age and gender of the contributors are set out in the tables below: 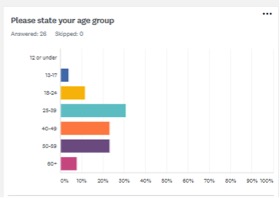 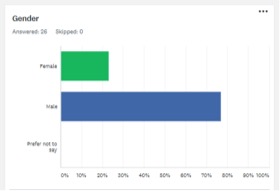 This represents a significant under representation of our junior athletes, which given that we are currently unable to provide junior training, because of Covid-19 restrictions and problems with the availability of Kingsway Athletics Arena is understandable. Similarly the under representation of junior members is a significant factor in the split of contributions by gender, with female membership being lower in the senior sections of the club, compared to our junior section.

Whilst the survey provides important insights in to the experience of club members, it is important that we ensure that views are balanced against views expressed by members through other channels, including informally and through the Committee.

Training regularity and participation by type of running

Members were asked how often they ran and what type of running they participated in, everyone who responded ran at least twice days a week, with the vast majority running between 2 and 5 days a week and around three quarters of those responding running 4 or more days a week. This suggests a general level of seriousness about running from the respondents. 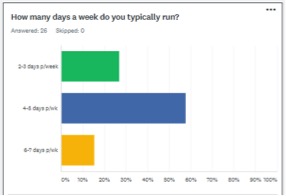 Responses relating to the type of running that people participated in showed high rates of participation across all disciplines, with road running close to 100%, trail running over 80% and both fell and cross country over 50%. Participation in track running of 65% is higher than would be expected from a representative sample of the membership, particularly in a survey biased towards senior membership, however this demonstrates that track running is an important part of our offer for a significant proportion of our members. 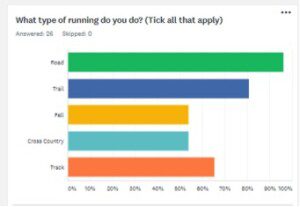 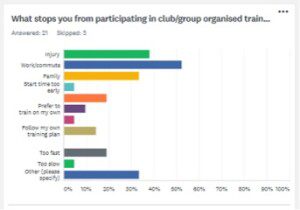 Later in the survey, participants are asked to comment on their experience as a Rochdale Harrier and a number of the comments relate to perceptions of training sessions not meeting the speed requirements of them as athletes. Examples include:

“The club does not feel as inclusive anymore. There used to be runners of all speeds and abilities, but I’ve found that as I’ve got older (and slower!), similar runners have stopped coming”.

“Sunday social runs are a great idea, but again there is one speed (fast) so it deters slower runners from joining in”.

“It is a great club but unfortunately does not cater for the slower runners”.

“Sometimes I do feel there are a larger proportion of runners compared to other clubs who just run for fun and are not bothered about getting faster”.

The club has recognised that there can be a fall off of members, who consider themselves slower runners, however a number of things have been done to accommodate these runners. These include:

However, it is recognised that there has been some impact of Covid-19 on this and also perception and communication issues and additional measures should be put in place.

In terms of helping runners get faster, a lot of work has gone in to coaching and particularly developing the training offer. In the last twelve months, these include:

There is a recognition that Thursday group runs have been too focused around running within a relatively narrow pace window, with both faster and slower runners feeling that the Thursday session offers little for them.

Tempo Thursday is a recent introduction that has been popular with some members, particularly a subset of the members that did not feel that the traditional Thursday group run offered much to their training.

We asked how often they through Tempo Thursday should happen and where it should take place from. 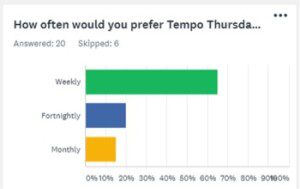 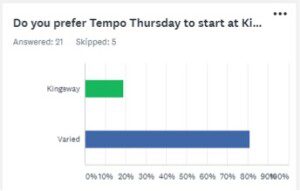 The majority of the people who answered these questions where keen for Tempo Thursday to happen weekly and for it to take place in a range of locations in the area.

We are keen to encourage participation and it is clear that Tempo Thursday increases participation in club organised activity. Some members have raised concerns that having this take place away from Kingsway makes the club more disjointed. However, others have stated that it has provided some of the varied training they were looking for and that it makes them feel more included in the club.

Respondents were asked about running goals. Close to 90% had running goals and around 75% would like or maybe like support with setting their goals.

The majority of respondents had represented the club in competition. The breakdown by discipline can be seen in the table below. 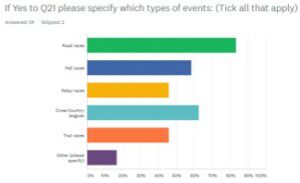 Members were asked what stops them competing or competing regularly and a number of comments were received.

“Injury has always prevented me, however I am looking to compete more often.”

“I answered Yes, but I seldom do the club champs, as I have my own targets. Plus the experience of the calendar being framed around the Fell Grand Prix when evidence backs up wider participation in road running. This means decisions aren’t made on a timely basis.”

Electronic payment and cost of membership

Around 90% of respondents to the survey stated that they would like to have easier electronic payment options.

One respondent pointed out that keeping costs low was important, because we do not want to create additional barriers to participation. Another suggested that fees should not go up whilst the club has large cash reserves.

Thirteen of the club members responding to the survey stated that they were, or were possibly interested in coaching at Rochdale Harriers. The club has identified the need to recruit coaches, particularly within the junior sections, but there is also a case for a more coach led approach throughout the club. 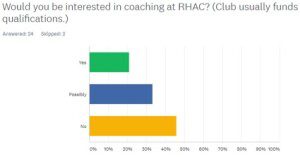 Respondents were asked if they would like the club to organise more social events, more than 80% of those that responded stated that they would. Suggestions included:

Responding to the Survey

In response to the survey we have come up with a number of actions that we wish to implement. The club committee have supported this implementation.