I was contacted this week by a Mr Kyle Johnson of Sydney, Australia. Whilst sorting through some of his late fathers belongings, he discovered a medal bearing the Rochdale Harriers name and logo. 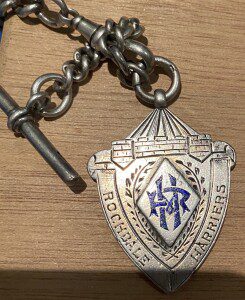 The medal was awarded to A. Johnson in 1910 and refers to “Nov.Han”. Referring to Joe Salt’s history of the club ‘Milestones’ I found that Andrew Johnson had won an 8 mile handicap in 1895, was the first counter for the Harriers when they entered the Northern Counties Cross Country for the first time in 1896 and was club champion in 1899, 1902, 1906 and 1907, finishing second in 1900 and 1901. At that time the club championship was decided by an eight mile race, with the champion receiving a gold medal. 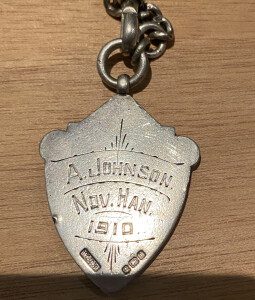 The club records relating to the period prior to the First World War are not very extensive and I cannot find any reference to the awarding of this medal in 1910, however it is likely based on the words “Nov.Han” that this relates to a November Handicap Race. Andrew Johnson would have had to have been over 21 to run as a senior in the Northern Counties Cross Country Championship in 1896, so by 1910 may have been reaching middle age. Kyle Johnson believes Andrew Johnson to be his great-grandfather and thinks that his grandfather was born in around 1910.

Mr Johnson has kindly offered to send the medal to the club and I have offered him a copy of ‘Milestones’.

I found that very interesting.