The Hinchcliffe twins, Lewis and Philip take a remarkable first and second at the Lakeland Trails Coniston 15k. Lewis describes the day:

The Lakeland Trails series takes place unsurprisingly in the Lake District. It’s popular, well organised (despite at times testing weather) and has a loyal fan base, including a number of Rochdale Harriers.

The Coniston 2021 10k and 15k races took place on Saturday 2nd October. Rochdale Harriers who took part that day were Philip and myself along with Jeff McCarthy. We all took part in the 15k. Phil was on a weekend break in Torver, whilst it was a 2hr drive for Jeff and myself. It would be accurate to describe the conditions as wet and dismal, however there was still much excitement as one would expect visiting the Lakes.

The race was split into either waves, flexibility in the start time offered in a Covid-present world, or a mass start. All three of us opted for the mass start, though it has to be said it looked decidedly short on numbers which may have been a combination of the waves being most popular or bad weather drop-outs!

The race had a flat start and Phil and myself were up there with the leading pack. It took the runners through Coniston and then the trails ascending the Coniston fells. Strava shows how most of the ascent was in the first big climb. 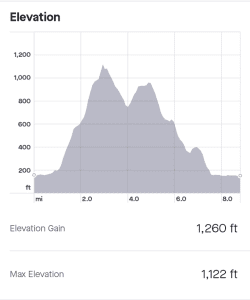 At this point there had been a slight shift in the leading pack, with Phil in a strong 2nd position and I some way back in 4th. The wide trail veered left and became single track at which point I had caught up to Phil, whilst the leader was way up in front after brilliant ascending. 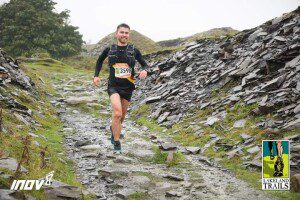 I gave chase over a descending section and had taken the lead by the car park which is usually used for those wanting to hike the Old Man of Coniston. The race trail followed the Walna Scar road and took another left, which was a wet, sometimes grassy sometimes rocky, descent into Torver. A short road crossing and it was almost the home straight which led through some woodland towards the lakeshore and eventually the finish line.

A special mention must go to a knee-deep waterlogged section near the end of the course. During the day it gained a notoriety as THE spot for spectators to witness a number of runners fall face first into the water. Credit to Jeff who at this stage expertly entered the water with ease, having studied what not to do earlier on in the day. 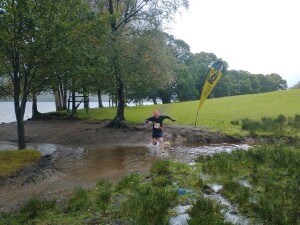 I came home 1st overall and Philip 2nd making it a Hinchcliffe 1-2 which both were delighted with. Jeff recorded a sizeable PB so it was good news all round. 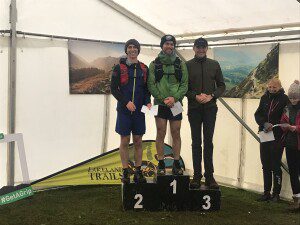 How the Harriers found it:

Jeff’s comments – It was fantastic to see Lewis and Phil run so well, achieving 1st and 2nd on the podium. Their times were superb on a very challenging course and extremely wet conditions. Myself – I was delighted with a PB by nearly 12 minutes on my 2010 run. Shows you can get better despite getting older!

Phil’s comments – “It’s probably the wettest that I’ve been prior to an event starting … but that didn’t dampen a fun introduction to the Lakeland Trail Series. Lovely route, with a challenging climb and fast descents. Overall, looking forward to doing it again in drier conditions”