Reporting the death of Alan Hughes aged 91 in Newark recently.

Alan was a Life Member of Rochdale Harriers and competed from 1947 until well into the 1980’s. 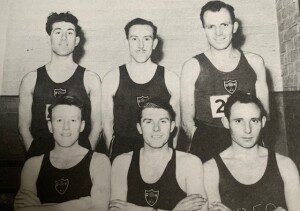 Alan Hughes (front, centre) as part of the Rochdale Harriers team that won the 1956 SELXC Championship

He was a Lecturer in Further Education.

Alan served as Club Captain and as Secretary from 1962 to 1963. He represented the Harriers on the track, in cross country and on the road. During his running career he ran for England in Veterans events, for the North of England, for Lancashire on the track and cross country. Alan won medals in World and European Veteran events on track and road.

He was an ever dependable counter for Rochdale in team events from the 1950’s onwards winning local, area and national team placings.

Rest in peace Alan. You ran a good race.